Sea of ​​Thieves: Release and a bottle of rum!

by Vaibhav
in Reviews
0

Arguably the most anticipated pirate game since the Corsairs series is coming out tomorrow. Sea of ​​Thieves. And let’s try to figure out what we know about it and what we can guess, and of course about what we expect from this game.

One of the key features of the game is party interaction, taken to a new level. During hot naval battles, players will have to maintain their ship and skillfully assign roles: steer the ship, batten up holes, take care of the sails, fire guns, go boarding and stuff like that. Skillful team play should be the key to success.

Developers pay a lot of attention to detail. Even having fought off an enemy who boarded a ship, it’s too early to rejoice – after a couple of minutes you will find that in the turmoil of the battle, the enemy stole one of the chests from your ship. After a successful sortie, you can get drunk here and, playing the harmonica, shoot into the air with pistols. Or, for example, putting someone from your team in a cage is enough for the other three to vote accordingly.
In short, the basis of victory is teamwork. Cartoon graphics also definitely benefited the game, because it creates its own unique atmosphere (and cartoon graphics are fashionable now).

Now let’s deal with this project in a little more detail.
The game does not have its own storyline, but there are three factions handing out quests. Treasure hunters from Gold Hoarders will send, in fact, to hunt for treasures, “mages” from Order of Souls – to kill especially strong skeleton captains, and merchants from Merchant Alliance will have to collect resources. Complete tasks – the reputation with the factions increases – the complexity and multi-stage quests increase. This is such a simple system. No one will forbid sailing the sea without a task in search of random treasures, sunken ships and giant sea monsters. Isn’t that what we’ve all been waiting for?!

Also, another nice feature for the game can be considered a small bonus as a comic book series from Titan Comics – the first volume can already be pre-ordered. The series is written by Jeremy Whiteley (Thor vs. the Hulk) and drawn by Roald Marcelius (The Incredible Hulk Issues 7-10, 2017). Nothing to say about the content, unfortunately.

There is even support for Russian subtitles from the start. But the voice acting will be in the whole game only in English.
Of course, you won’t surprise anyone with a very large world in modern online games, but still … The game procedurally generates conditions in quests and objects on the map (for example, sunken ships), but all the islands are manually drawn by developers. But the world is still huge, it will take 6-8 hours to swim the entire Sea of ​​Thieves map diagonally. And it’s very cool! You will never see anything like this anywhere else.
It is also worth saying that this game can be played solo. Sea of ​​Thieves is designed for four-player co-op. Leading a big frigate with your friends across the seas is the soul of the game. One raises the sails, the other examines the surroundings from the “crow’s nest”, the third holds the helm, and the fourth scoops water from the hold – a real marine romance! 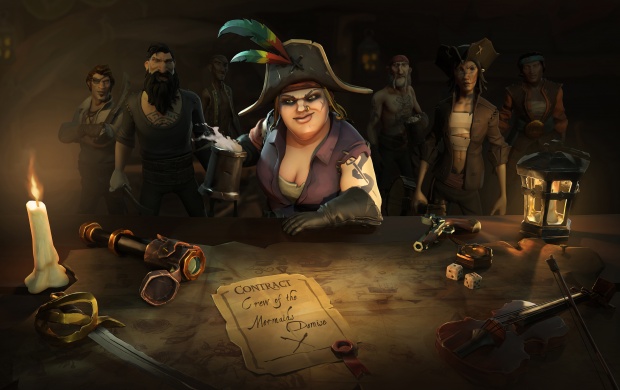 But there is of course in this whole barrel of honey and a major fly in the ointment.
In order to play this game, you will have to install windows 10 and purchase it from the official windows store. And if you buy a digital copy for PC, you’ll also get the Xbox One version, and vice versa. This does not apply to disks – keep in mind. Progress across platforms will be shared, you can start playing on console and then continue on PC. Cross-platform multiplayer is also supported.
Well, here’s a video from the game, which is definitely worth checking out before buying.

Hearthstone is the best card game

Crossout Review: A Look at the Endless Wasteland

Dauntless is the European answer to Monster Hunter