There are such massively multiplayer online role-playing games in which, in essence, there is nothing unusual at all, but for some reason they are addictive. For many of my friends, this was most often the case with Lineage or the domestic Arena Online.

But it happened to me with Traha Global, which recently entered the global test. And in essence, there is nothing unusual in it at all, but for some reason it is pleasant to run in it, washing down the gameplay with tea every evening. But why it can be so addictive, I want to try to figure it out with you in this article.

Perhaps the first thing to know about the game is that it is actually far from new. The first version of the game was released back in 2019 only in Korea and was a typical mobile MMO with auto-battle. And this year, the developers decided to give a second life to their project and remove the automatic battle from there and release the game on all platforms.

As for some kind of plot and lore, everything is pretty standard with this.

An open world MMORPG awaits you and me, where players will find themselves embroiled in an endless war between two ruling factions – Naiads and Vulcan. The game can offer good graphics on Unreal Engine 4.

Upon booting into the game, you will first need to select your faction. Whatever faction you choose, only the starting locations, some rewards for the game, cosmetics, and of course the plot will differ.

There is no game advantage if you choose one faction over another. However, it is recommended that you play as a faction that your friends will play as, as belonging to an enemy faction will limit the number of players you can team up with.

There is not much to tell about customizing the appearance of the character and choosing a class. There are not many options for appearance and it all looks rather poor.

Classes in the game depend on the weapon you chose at the start of the game, and you have seven options in total:

As the game progresses, we will be able to try out all seven classes, because for completing story quests we will sometimes get special keys that will make it possible to open any weapon for testing.

See also  The authors of Expeditions: Rome, Hunt: Showdown and Hitman are preparing a story RPG 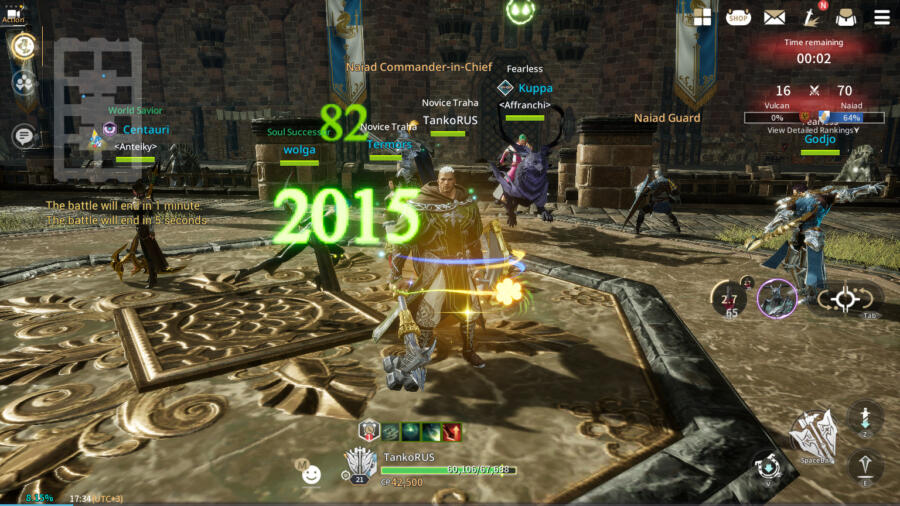 As for quests, they, like rewards for all possible activities, fall on us like from a cornucopia. Which, in fact, is standard for any mobile game. By the way, experience here falls only from quests, so it’s impossible to engage in a simple farm of mobs here.

But if you are not interested in farming, then you can go to the battlefields and get experience there, in classic PvP. By the way, they give a lot of experience, since the game is essentially focused on PvP. The essence of the BG mode here in general personally reminded me of Dota 2. Where your team must escort their giant knight to the enemy base or destroy the enemy one.

Nobody canceled the standard dungeons and world bosses for any game either.

As for pumping, it is standard here, and is tied to the Korean mobile multiplayer online role-playing games Combat Powers, which are quite understandable for all fans. This very “combat power is growing due to the pumping of passive and active skills, as well as through more powerful weapons in the hands of the character.

In general, the leveling and equipment system in this game requires a separate analysis in the guides, because there are no typical items here, and all armor and other characteristics depend either on what you yourself distribute over the character, or on jewelry that raises certain indicators. And it usually needs to be crafted or bought.

Clothing in the game is purely cosmetic.

But since here we are still talking more about the first impression of the game, I’ll tell you honestly that in those five days of unhurried pumping that I spent in the game and took level 25, I never needed to craft something.

It was quite enough what they give for quests or passing dungeons.

I don’t know why, but it’s still fun to play the game. Probably because it feels good both on my not very new Poco X3 Pro and on a laptop with a GTX 1050. And this, not to mention the fact that almost all of ours are in the game on the European server.

And you can safely turn on the game in the evening with tea and cookies or a cold beer and just relax in it for a couple of hours before going to bed.

Just below, I’ll just attach a small video clip from my gameplay.

Seraphim Season kicks off in Destiny 2

Online shooter Valorant has been updated with a quick game

Vegas about mass destruction of demons will be released next year